A lovely day with the girls. 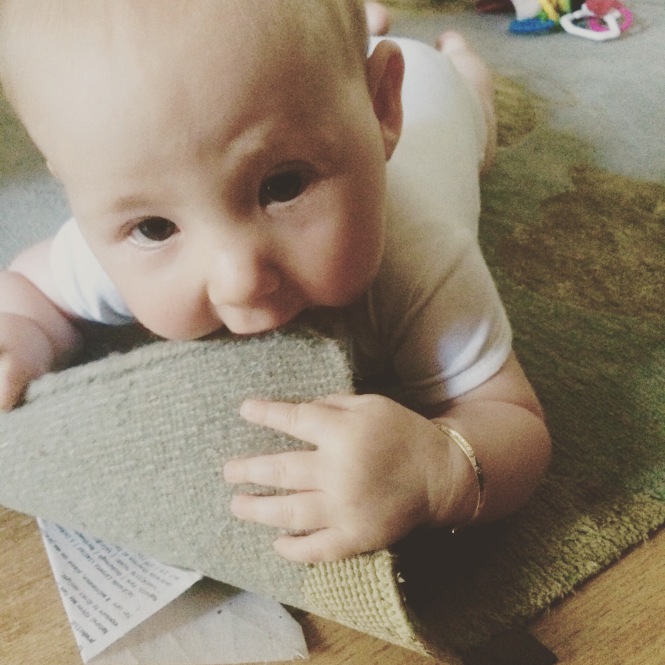 Last night was another good night where I got to sleep in my bed. This makes me so happy. I’m much less of a twat when I’m well rested.

This morning we had an all out battle with Nina over a bowl of lion  cereal (healthy) that ended with her practically trotting herself over to the naughty chair (I think she knew she was pushing it) – while sitting quietly she decided to stop being a shit about it and eat her breakfast.

We totally lost track of time getting ready so had to throw a picnic together at warp speed. It looked like it might rain but we went anyway as we’re just wild like that.

We went to meet some friends at the inland beech (Rutland Water), once again the weather folk were wrong and it was lovely, sunny and warm.

After a while, we decided to take a dip in the water (the reservoir – posing as the sea)

This sounds lovely doesn’t it? Well no. It was like standing in the bog of eternal stench.  A stinking, algae filled swamp.

We didn’t stay in the water long.

Some ‘bigger boy’ kid that was playing with a bunch of others on the ‘beach’ took a disliking to Nina who had decided she wanted to play – she was ruining his day and he wanted everyone to know about it.

After making a couple of thinly veiled comments about playing nicely and getting zero response from said ‘bigger boys’ parents, I decided that beach time was over (before I either 1. Clothes lined the kid and told him to stop being a dick or 2. Engaged in fisticuffs with the parental unit – who was totally uninterested in what her bully child was doing [she would have kicked the shit out of me ?]) we went back to our picnic area.

Nina had an icecream. Once she’d finished Bobbi helped her hide the evidence (and attempted to make herself an icecream suit).

We got home and had dinner, all of my conversations with Nina were conducted through song. With harmonies and everything. All in all it was a lovely afternoon.

I asked Dan to sort Nina for bed while I cleaned up and after taking ‘a minute’ (half an hour) – she was skirting under my feet while I did the dishes so I sent her to tell him not to be so lazy – she told him not to be a lady – he was confused and I think slightly offended.

He managed to get her to sleep while Bobbi took to chewing the carpet (she was determined to do this) so I picked her up – she was really pissed off at me for interrupting her fun, so she shouted in my face for a bit until she fell asleep.

So now both girls are asleep after a lovely day with friends. Me and Dan are going to watch a film and I have a few bottles of bitter with my name on them.