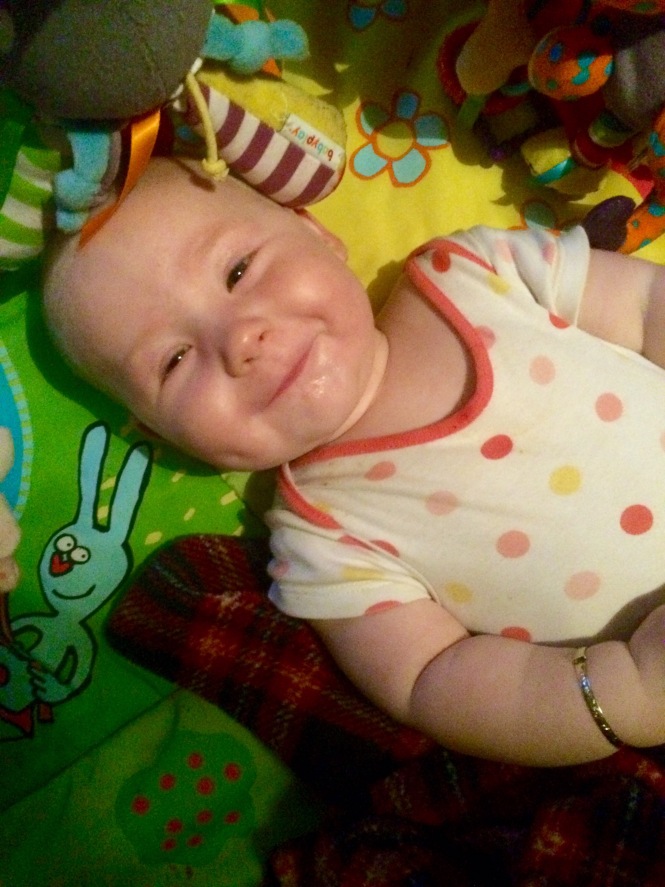 Yesterday a friend and I took the kids to the cinema.

It was like sodding Siberia in there and I could practically see the girls’ breath, so I spent most of the film shivering and cuddling up to Bobbi for warmth (For both of us – it was inhumane!)She was over tired so I spent the duration physically grappling with her, repeatedly picking my crisp packet back up as she kept batting it out of my hands and trying to stop her from giving us both a Pepsi shower.

She finally passed out with a little help around two thirds of the way through. I tried to feed her in there only to be bloody bitten – after that I was too scared to try again so I just sort of squirted milk in her general direction. It worked ???

Nina decided at this point that she was a bit bored and started talking – loudly – and climbing on/trying to get off her chair. I palmed her off with sweeties (I’m amazed she didn’t yack – she was loving life).

Once the film was over, we walked into town, where some total bell end decided he’d have a go at plowing Nina down (even though he was on a zebra crossing – in a pedestrianised zone that he shouldn’t even fucking be in) while shouting out of his window ‘keep your child under control’.

Prick. Nina (the 2 year old) had her head firmly up her bum – where all 2 year olds store their heads almost permanently. She had her little dollies in her little pram and knows that ZEBRA FUCKING CROSSINGS are relatively safe – coupled with the fact that there were other people already crossing means that ipso facto – that guy needed to trot off home and punch himself in the balls – repeatedly.

Once home I had the same conversation with Nina on and off for an hour or so – she kept asking for ‘dragon hunt’ – toddler translate didn’t compute that one so I tried to decipher what the hell she was on about.

It became glaringly obvious when I attempted to give her Apple juice – she’d been asking for black current – of course! I’m such an arsehole – why did I not understand dragon hunt = a refreshing cup of black currant ??

Later on I attempted to escape childless to go out of the house where there were other people. ADULT PEOPLE! If Bobbi was able she would have rolled up her sleeves, wagged a finger and said ‘I don’t fucking think so mother!’ So she came with me. It was still nice to get out.

We decided to top off a lovely day by not sleeping. My favourite way to spend the night is awake. Thanks for helping me with that Bobbi ??

Why have you put potato in your ear child?

Show me the silver lining …